The ability of children to safely travel to and from their schools is a high priority for the New Jersey Department of Transportation (NJDOT). Safety has long been an issue in school zones where buses, personal vehicles, pedestrians, and bicyclists all share the same space. In particular, child pedestrians and bicyclists face significant safety challenges when traveling in school zones due to congestion and environmental problems caused by personal vehicle use. Traffic congestion can lead to more traffic collisions, child pedestrian injuries, and deaths, especially in settings with on-street parking and high traffic volumes where children can emerge unexpectedly from behind parked cars. Risky drop-off behaviors such as double parking, reversing, and crossing between parked cars are also associated with traffic congestion and can pose a threat to child pedestrian safety. To help address these concerns, NJDOT has partners with schools and communities throughout New Jersey to implement the New Jersey Safe Routes to School Program, which aims to create safer conditions for people to walk, bike, or use other wheeled devices through a variety of interventions. This article will explore how the Federal Highway Administration’s (FHWA) Proven Safety Countermeasures can be used in coordination with safe Routes to School to provide a safer environment for pedestrians and bicyclists in areas with high pedestrian volumes and more vulnerable users, such as school zones.

Reducing speed, increasing driver awareness, and reducing pedestrian exposure are essential objectives for improving school zones. To achieve these goals, several strategies can be implemented within the zone. In New Jersey, the speed limit in school zones is automatically 25mph, but it can also be lowered. Municipalities and Counties can follow FHWA guidance to initiate a speed limit adjustment. Driving at lower speeds enables the drivers to see more of their surroundings, giving them more time to react in case of any mishap. FHWA notes that drivers traveling at 20 mph are more likely to yield to pedestrians, and the probability of suffering severe consequences from crashes is substantially reduced. To achieve desired speeds, other speed management strategies such as traffic calming are often implemented concurrently with reduced speed limits. 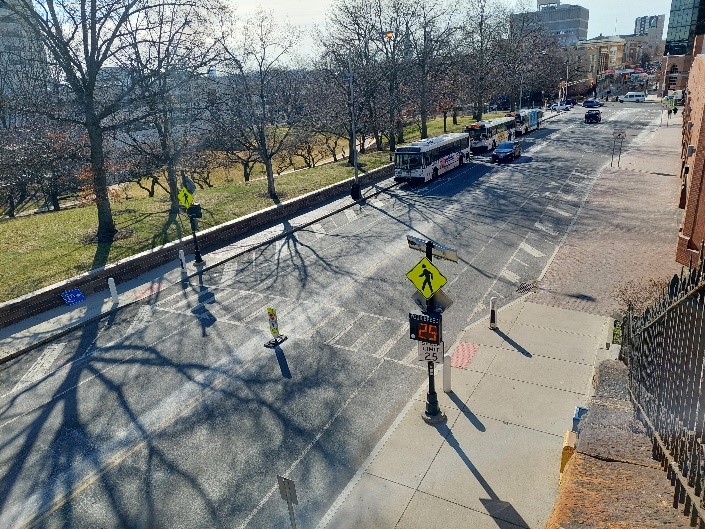 Depending on various factors, including pedestrian and vehicle traffic volumes, school zones may be good locations for implementing many of the previously discussed countermeasures promoted by NJDOT highlighted in our last article (pedestrian hybrid beacons, pedestrian crossing islands, and leading pedestrian intervals). In most school zones, in addition to sidewalks and  walkways that allow for the separation of pedestrians and vehicles, low-cost strategies that enhance crosswalk visibility, including the application of high-visibility pavement markings, proper lighting at crossings, and stop or yield signage, will also help to increase safety. These measures have been shown to reduce pedestrian crashes by 40, 42, and 25 percent, respectively. 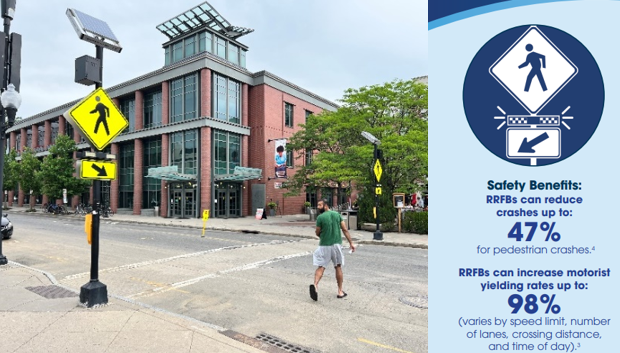 Rectangular Rapid Flash Beacons (RRFBs) are an approved FHWA countermeasure that are being increasingly used in school zones. RRFBs are pedestrian-actuated signals that can be used at uncontrolled marked crosswalks and are particularly effective on multi-lane roads with speed limits of less than 40mph. Using yellow indicator lights, RRFBs flash with an alternating high frequency when activated to enhance the conspicuity of pedestrians at the crossing. RRFBs have been proven to reduce pedestrian crashes by up to 47 percent and increase motorist yielding rates by up to 98 percent.

Speed safety cameras (automated speed enforcement) are another recently approved safety countermeasure, but their use is currently prohibited in New Jersey. In many states and cities, the use of these cameras is limited to school and work zones. I n New York City, fixed camera units were shown to reduce speeding in school zones up to 63% during school hours. Speed cameras result in slower speeds and improved safety, particularly in areas with high crash rates. Fixed units have been shown to reduce crashes by up to 54 percent, while point-to-point units can reduce fatal and injury crashes on urban expressways, arterials, and freeways by up to 37%, and Mobile units can reduce fatal and injury crashes up to 20% on principal arterials.

The combination of different countermeasures and interventions within a school zone can increase safety for pedestrians and bicyclists, while increasing drivers’ awareness of the presence of students, helping to create a safer routes to school for our most vulnerable roadway users.